From deep and mysterious, to weird and quirky- let’s dive into the rabbit hole with our favorite Cheshire Cat quotes from Alice in Wonderland!

A mysterious pink cat with a mischievous grin- that’s the Cheshire Cat. He also has the odd ability to disappear in thin air, leaving only his smile (quote Alice- a grin without a cat). As with everyone from Wonderland, he is peculiar, and dark; the only difference being that he admits this with pride.

He first appeared offering directions to Alice. And although most of these were allusive, this nonetheless led her to meet with March Hare. Which then led her to the mad hatter, and so on. It also appears that everyone in Wonderland fears the Cheshire Cat, maybe due to the fact that he is the craziest of them all.

But despite the crazies, he did serve as the guiding soul for Alice in her journey in Wonderland. And people love this oddball all the same! In this article we’ve listed the best Alice in Wonderland Cheshire Cat quotes.

Let’s dive into the rabbit hole. (If you want to read similar articles, then check out Minion Quotes or Bojack Horseman quotes)

Alt tag: animated gif of Cheshire Cat saying “Most everyone’s mad here. You may have noticed I’m not all there myself.”

Here are our favorite Alice in Wonderland Cheshire Cat Quotes!

#1  “How puzzling all these changes are! I’m never sure what I’m going to be, from one minute to another.”

#2  “If you don’t know where you want to go, then it doesn’t matter which path you take.”

#3  “Puurrfect. When you’re not on edge, you’re taking up too much space.”

#4  “Well! I’ve often seen a cat without a grin,” thought Alice; “but a grin without a cat! It’s the most curious thing I ever saw in all my life!”

#5  “You used to be much more…muchier. You’ve lost your muchness.”

#7  “Well, some go this way, and some go that way. But as for me, myself, personally, I prefer the short-cut.”

#8  “When the day becomes the night and the sky becomes the sea, When the clock strikes heavy and there’s no time for tea. And in our darkest hour, before my final rhyme, she will come back home to Wonderland and turn back the hands of time.”

#9  “Those who say there’s nothing like a nice cup of tea for calming the nerves never had *real* tea. It’s like a syringe of adrenaline straight to the heart!”

Source: Alice in Wonderland (2010), from Tumblr

#6  “You may have noticed that I’m not all there myself.”

#7  “The uninformed must improve their deficit, or die.” 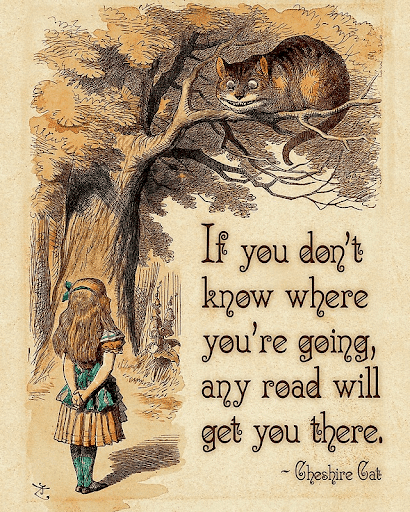 Even though this cat is seemingly crazy-he does say some of the most philosophical quotes in Alice in Wonderland. The most popular among these Cheshire Cat quotes is the which way to go quote. In life, this can be interpreted as asking the question- how can you achieve something, if you don’t know what that something is.

“Would you tell me, please, which way I ought to go from here?”

“That depends a good deal on where you want to get to,” said the Cat.

“I don’t much care where–” said Alice.

“Then it doesn’t matter which way you go,” said the Cat.

#2  “I am not crazy, my reality is just different from yours.”

#3  “Imagination is the only weapon in the war against reality.”

#4  “Haste makes waste, so I rarely hurry. But if a ferret were about to dart up my dress, I’d run.”

#5  “A secret is only a secret when it is unspoken to another.”

#6  “I knew who I was this morning, but I have changed a few times since then.”

#7  “Every adventure requires a first step. Trite, but true, even here..”

#11  “Never let anyone drive you crazy; it is nearby anyway and the walk is good for you.”

#14  “A rose is still a rose, even hidden under different petals.”

#15  “Only the insane equate pain with success.”

#17  “Forgetting pain is convenient, remembering it; agonizing. But uncovering the truth is worth all the suffering. And our Wonderland, though damaged, is safe in memory….for now”

3 Cheshire Cat Quotes About Being Mad

“I am afraid so, you are entirely bonkers. but I will tell you a secret… all the best people are.”

“And how do you know that you’re mad?”

“I suppose so,” said Alice.

“Well then,” the Cat went on, “you see, a dog growls when it’s angry, and wags its tail when it’s pleased. Now I growl when I’m pleased, and wag my tail when I’m angry. Therefore I’m mad.”

“I call it purring, not growling,” said Alice.

Cheshire Cat : Or, you could ask the March Hare, in that direction.

Alice : But I don’t want to go among mad people. 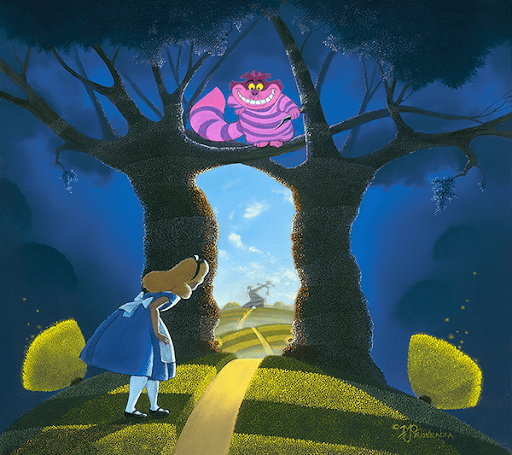 To start off, here are some Cheshire Cat Quotes from Disney classic Alice in Wonderland (1951).

Cheshire Cat : You know? We could make her *really* angry! Shall we try?

Cheshire Cat : Oh, by the way, if you’d really like to know, he went that way.

Cheshire Cat : He did what?

Cheshire Cat : Who did?

The Cheshire Cat: “Do you play croquet with the Queen to-day?”

Alice: “I should like it very much but I haven’t been invited yet.”

The Cheshire Cat: “You’ll see me there.”

#4 Cheshire Cat : [singing]  “Twas brilig, and the slithy toves / Did gyre and gimble in the wabe: / All mimsy were the borogroves, / And the mome raths outgrabe.”

#5  “The proper order of things is often a mystery to me.”

#6  “I’m not crazy, my reality is just different than yours.”

Alice: What are you doing?

Cheshire Cat: It needs to be looked at by someone with evaporating skills or it will fester and putrify.

Cheshire Cat: What do you call yourself?

Alice: There’s been some debate about that.

Cheshire Cat: I never get involved in politics.

Alice: You’ve gone quite mangy, cat… but your grin’s a comfort.

Cheshire Cat : And you’ve picked up a bit of an attitude, still curious and willing to learn, I hope.

#12  “Somehow you strayed and lost your way, and now there’ll be no time to play, no time for joy, no time for friends – not even time to make amends.”

Cheshire Cat : Hello. How do you like the Queen?

Alice : Not at all. I don’t like that of losing my head. Would you?

Cheshire Cat : I could hardly afford that.

We hope you enjoyed the article, if you want to read more about devious or eccentric characters, then check out the following:

29 Funny and Inspirational Urdu Quotes for You to Live By