Home » Signs Coworkers Are Intimidated By You
Management

Signs Coworkers Are Intimidated By You

In the workplace, you cannot avoid people all the time. However, there might be a few of your coworkers that show signs they are intimidated by you. Here are those signs you need to check.

There’s nothing wrong with having big ambitions and pursuing them with passion. There is, however, a fine line between doing so and terrifying everyone around you. When you intimidate your coworkers, they are less inclined to seek your help. Resulting in under-communication when working with you, lowering productivity.

Avoid the latter at all costs because it may impair your ability to lead. Assess those who don’t like you at work, and determine which of your coworkers are intimidated by you.

If you are ambitious, goal-oriented, and committed at work, you must have at least one work rival. You are likely to push yourself and others to be and deliver the best results if you have these traits. These traits give you leadership qualities, which intimidate others. Here are a few signs that you are coming off as intimidating.

Signs Coworkers Are Intimidated By You 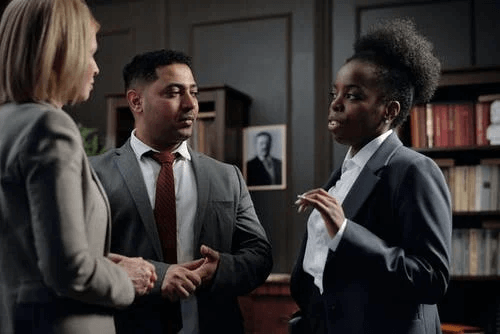 One of the first signs of intimidation is when people you’re talking to avoid making eye contact with you. When coworkers dart their eyes around while speaking with you, it might be a sign that they fear you. They don’t want to “submit” to you since they feel eye contact is a sign of weakness. It’s a subtle way of excluding you without actually saying anything. This could also be one of many signs your coworker has feelings for you.

Closed body language is a defensive stance indicating that you feel threatened. For example, turning away from you, crossing your arms, and avoiding eye contact. You intimidate them and they do not want to interact with you unless it’s necessary.

This might also state that they are uncomfortable in your presence and will not open up to you. They imply that you will have brief and ineffective talks with them. People will assume open, relaxed postures or lean toward you if they feel at ease and equal to you.

When they’re near you, they don’t say much.

When you come into a room, everyone who was talking before you did just stops and gets back to work. Then this is an obvious sign that your workers fear you. They avoid such conversations with you because they’re afraid of you.

They don’t ask for your help.

You aren’t the first person people think of when they need aid. This is because they are so scared of your abilities. They would rather ask someone else than expose themselves to the fact that you are “superior.” For them, it’s a game of who can get the most done. They would rather be at the top than collaborate for the good of the firm.

People around you are always apologizing.

An apology is a sincere statement of regret. An apology may also be a subtle tactic to imply submission to you. They see you as the arbiter and when they believe they have broken one of your rules, they ask forgiveness.

They don’t contradict you

Even if you have a fantastic concept, coworkers will question you about alternatives. But, others will be wary of challenging you if you appear scary. This may appear to help the early stages of a project run well. You’ll pay the price later when problems they should have mentioned start costing you. This may be one of many signs your boss wants you to stay. They trust you enough with your ideas without questioning much.

They tend to avoid you.

Because you know they are uncomfortable with you and they avoid forming connections. They start to notice your presence and absence more. It allows them to feel at ease and open in such an environment.

A coworker keeps a safe distance from you, out of shyness or jealousy. There is a chance that it’s one of the signs a female coworker likes you but is hiding it. You may assess whether your coworkers are uncomfortable with you. They may see you as a competition for your next promotion based on the current scenario.

The working environment should be pleasant on some level to develop a relationship. After all, they are coworkers, not friends, so there are certain limits. Another sign that you intimidate someone is if they are supportive of everyone but you. They use their busyness as an excuse to avoid assisting you.

They start ignoring you and show no interest in interacting with you from the day you join or after events. This suggests that you’re intimidating to them.

They are insecure and they scheme behind your back.

There must be people who are envious, backstabbers, and generally useless. Whether it’s a friendship or a commercial relationship. They are unable to express anything good about anyone or anything. Such folks are fake, behaving well when you’re there but making fun of or criticizing you when you’re not.

Your coworkers gossiping behind your back and spreading rumors. This is a sign that they are insecure and a backstabber, and you should be careful. The only thing that concerns them is having something to talk about at the meeting.

They don’t recommend you for new opportunities

You’ll notice your coworkers acting intimidated towards you at work. You should be mindful that they are most likely passing you up for better possibilities. They will destroy any opportunities that may assist you to grow in your career. They do not want you to succeed or do better than them.

You’ve also observed that one person in your company avoids you and never contacts you. Even if you’re on the same team they refuse to meet and continue to avoid you for no clear reason.

They display the traits of insecure coworkers who worry about your achievement. They never talk to you, hang out with you, and rely on someone else to deliver a message to you. A deceitful communication style, as well as a lack of interest or complete avoidance. If you notice these traits, they are all signs that someone at work is afraid of you.

Even if your business has an open-door policy, you are alone at work.

This may expand to non-physical areas such as phone calls and emails. You tell others that they may contact you at any time but they still don’t. This is a sign that they aren’t comfortable approaching you with problems or queries. Instead of approaching you, they may seek alternate solutions.

They would rather speak with other members of the team or their mentors. They may avoid situations in the worst-case scenario to avoid being uncomfortable.

They’ll be observing you.

You will discover that if you intimidate a superior, they will micromanage you. They’ll analyze your outputs under a microscope. You’ll realize that this is something they only do to you.

They always single you out, and they may attempt to pass it off as normal management behavior.  If you observe, you’ll discover that this treatment is exclusive to you. This might be one of the signs a man loves you deeply. They try to keep you close to them as much as they can.

They think/tell you that you are intimidating to them.

Whatever the case, nothing stays a secret for long, especially if someone dislikes you at work. Working with someone who harbors such bad feelings toward you is tough. Whether they show early signs of it or not.

You may have no intention of intimidating your coworkers, but you feel awkward with them. This is especially prevalent when you are new to the job, in a higher position, or in general the boss. If you don’t communicate with your coworkers. They may feel intimidated by you even if you’re on the same team. You can’t even ask the smallest favor.

What will you do if you learn that you intimidate your coworker? 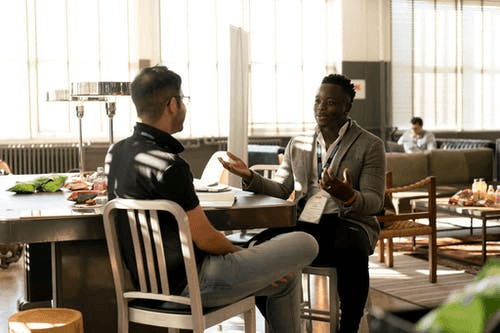 You may communicate with your coworker and make it clear to them if your coworker is afraid of you. If you’re a manager or supervisor and see these signs in one of your employees, you should first help them. Furthermore, you may start by eliminating negative effects from your surroundings.

Drop the negative thoughts in someone’s head. Let them know that their impressions of you aren’t accurate. Doing what is necessary to maintain a pleasant working environment is worthwhile. You must also distance yourself from the excitement and dedication you have for your job.

It’s not your fault if a coworker feels threatened by you. Allowing them to deal with their uncertainties helps you to focus on your task.

Remember, it’s not always about you; more often than not, it’s about them. Their strange behavior is because of jealousy and negative sentiments. There is nothing to worry about. But if someone’s behavior is affecting your everyday performance, you should act on it.

Signs Your Friend Doesn’t Respect You

20 Anime Quotes About Love to Get You Hyped for February

5 Hobbies Everyone Should Have for a Better...

12 Ways To Show Yourself Respect (And Teach...

4 Reasons Why You Should Never Settle For...

4 Reasons Why You Attract What You Are...

25 QUOTES ABOUT BEING ALONE