25 Grinch Quotes (Let Go Of the Killjoy in You)

In a bit of a pickle? Lighten up, have a giggle! 25 grinch quotes we have listed. So you’d smile even if the world is twisted.

Ever watched the film ‘How the Grinch Stole Christmas’? It was our Christmas tradition when I was younger to watch this film. No complaints though as it was my favorite Christmas movie of all time! I loved that this grumpy, crabby character can turn into someone with a big heart (literally in this case). The film gives a feeling of feathers floating in clouds.

The Grinch is such a classic that there are many versions and reboots. Kevin was even watching it in the hit film Home Alone and Home Alone 2! There’s also an animated film in 1966 (a good animated classic). And in recent times, it’s been rebooted as a computer-animated film starring Benedict Cumberbatch. Of course, this would not be possible without it’s original- How the Grinch Stole Christmas by Dr. Seuss.

To start off, here are Dr Seuss Christmas Quotes:

Now, please don’t ask why. No one quite knows the reason.

Then the Grinch thought of something he hadn’t before!

“Maybe Christmas,” he thought, “doesn’t come from a store.”

This grinch heart grew quote is something that makes me smile whenever I hear it. It’s the transition of a grumpy ‘ol bad doer into a wholesome community helper.

And what happened then? Well…in Whoville they say,

That the Grinch’s small heart grew three sizes that day!

And he brought back the toys! And the food for the feast!

And he, HE HIMSELF! The Grinch carved the roast beast!

Then he shook! What he saw was a shocking surprise!

Every Who down in Whoville, the tall and the small,

Was singing! Without any presents at all! 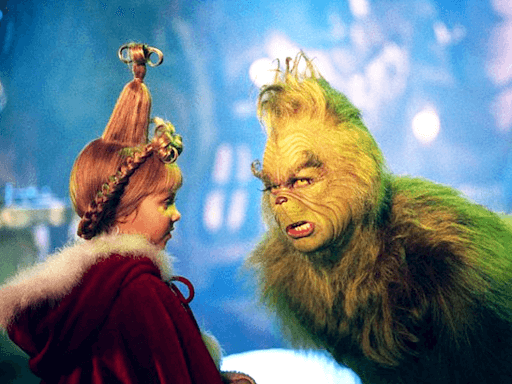 Source:  How the Grinch Stole Christmas (2000 film), retrieved from here

The 2000 version of How the Grinch Stole Christmas is definitely my favorite version of The Grinch. It has some of the best The Grinch lines.

#4  The Grinch: “I could use a little social interaction.”

#6  The Grinch: “Blast this Christmas music. It’s joyful and triumphant.”

The Grinch: “I’m booked. Of course, if I bump the loathing to 9, I could still be done in time to lay in bed, stare at the ceiling and slip slowly into madness. But what would I wear?” 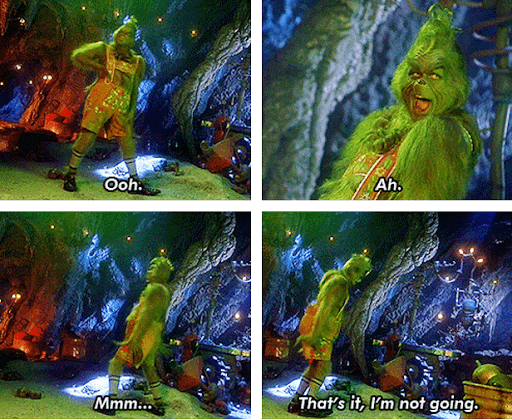 Source: How the Grinch Stole Christmas (2000 film), retrieved from here

The Grinch : And they’ll feast, feast, feast, feast. They’ll eat their Who-Pudding and rare Who-Roast Beast. But that’s something I just cannot stand in the least. Oh, no. I’M SPEAKING IN RHYME!”

Cindy Lou Who : “Santa, what’s the meaning of Christmas?”

The Grinch : [bursts through the Christmas tree]  “VENGEANCE!”

The Grinch: “I asked you first.”

Echo: “…Saying exactly what I say.”

The Grinch: [whispering] “Alright, fine! I’m not talking to you anymore! In fact, I’m going to whisper! So that by the time my voice reverbarates off the walls, and gets back to me, I won’t be able to hear it.”

#6  The Grinch: “Those Whos are hard to frazzle, Max. But, we did our worst, and that’s all that matters.”

Here are some quotes from the citizens of Whoville:

#1  Lou Lou Who: “You can’t hurt Christmas, Mr. Mayor because it isn’t about the gifts or the contests or the fancy lights.”

#2  Donna Who: [on the phone] No, I can’t today. I have a list of errands a mile long and the babysitter left the sink backed up. No, I’m not complaining. I’m venting. There’s a difference. Okay. Talk to you later. I have to get breakfast on the table. Right after I unclog this drain again! It’s like concrete.

#3  Lou Lou Who: “I don’t need anything more for Christmas than this right here. My family.”

#4  Cindy Lou Who: “No matter how different a Who may appear, he will always be welcomed with holiday cheer.”

#5  Cindy Lou Who: “No one should be alone on Christmas.”

The Grinch is a classic- it truly is! Though the reboots are sometimes a hit and miss. Hope you had fun reading our quotes! Did you take them to heart, or even took some notes?

If you want to read more, we got them hun! Click the articles below for some extra fun.