From funny and sarcastic, to absurd and out of this world- these hilarious Deadpool quotes will surely leave you in stitches!

To start off, who exactly is Deadpool?

Deadpool is a trigger-happy mercenary who has a foul mouth and an affinity for everyone and everything. He also seems to have the power to break the fourth wall and to have a vast knowledge about modern culture. He was born in Canada, but grew up to be the least Canadian person ever (which goes to show that Ryan Reynolds is perfect for the role).

Deadpool definitely has wisdom ranging from which X-Men is best, to how to perfectly cut someone’s neck off. Kidding aside, Deadpool definitely could teach us a thing or two about life, and love, or maybe just about loosening up really! So in this article, we’ve listed the most sarcastic, and borderline not safe for work of the best Deadpool quotes to give you the finest Deadpool has to offer. 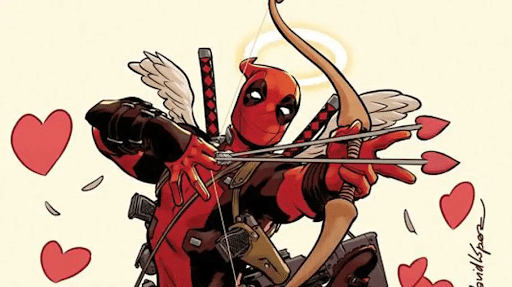 Vanessa: “Who would do such a thing?”

#3  “Vanessa’s already working on plan A, B, all the way through Z. Me? I’m memorizing the details of her face. Like it’s the first time I’m seeing it. Or the last.”

#5  “If your left leg is Thanksgiving and your right leg is Christmas, can I visit you between the holidays?”

#6   “Love is a beautiful thing. When you find it, the whole world smells like daffodil daydream.”

Vanessa: “Put them together, and you can see the picture on top.”

#10  “You don’t need to be a superhero to get the girl. The right girl will bring out the hero in you.”

#11 “I swear to God, I’m gonna find you in the next life, and I’m gonna boombox Careless Whisper outside your window. Wham!”

Here are some of Deadpool’s memorable catchphrases!

To start off, here’s his favorite quote: the Deadpool maximum effort quote.

He says this quite a lot (even in the comics), and is often used to pump him up (as he’s pretty blasé most of the time).

#1  “Looks *are* everything. You ever heard of David Beckham speak? It’s like he mouth-sexed a can of helium. Think Ryan Reynolds got this far on his superior acting method?”

#2  “Life is an endless series of train-wrecks with only brief, commercial-like breaks of happiness.”

#3  “Motivation doesn’t last. Neither does bathing. That’s why we recommend it daily.”

#4  “I do not hate everything about the world. Just every show they’ve ever put on after ‘Friends’.”

Weasel: “l what he looks like after his mutation] You are haunting. You look like an avocado had sex with an older, more disgusting avocado.”

#3  “I had another Liam Neeson nightmare. I kidnapped his daughter and he just wasn’t having it.”

Deadpool: “You know what they call cancer in Spanish?”

Weasel: “What do they call it?”

#7  –pretending to faint– “Ooh, pardon me, sir, your highness! Lend me a white glove so I can slap it across your face!”

#9  “McAvoy or Stewart? These timelines are confusing.”

–raises his hands– “WAIT! You may be wondering why the red suit. Well, that’s so bad guys don’t see me bleed.”

–points at a thug on the left– “This guy’s got the right idea… He wore the brown pants!” 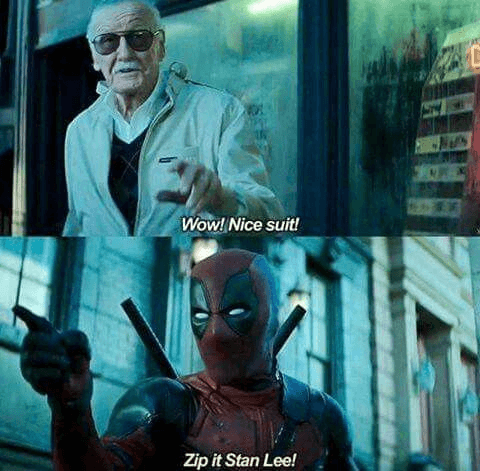 Vanessa: “I love you, Wade Wilson. We can fight this.”

Deadpool: “You’re right. Cancer’s only in my liver, lungs, prostate, and brain. All things I can live without.”

#12  “Guy came in here looking for you. Real Grim Reaper-type. I don’t know. Might further the plot.”

#14  “You’re probably thinking, ‘My boyfriend said this was a superhero movie but that guy in the suit just turned that other guy into a fucking kabab!’ Well, I may be super, but I’m no hero. And yeah, technically, this is a murder. But some of the best love stories start with a murder. And that’s exactly what this is, a love story. And to tell it right… I gotta take you back to long before I squeezed this ass into red spandex.”

Dopinder: “Who brought this twinkly man?”

Deadpool: “Twinkly, but deadly. My chrome-penised friend back there has agreed to do me this solid. In exchange, I told him I would consider joining his boy-band.”

Colossus: “Is not boy-band!”

#16  *after getting handcuffed to Colossus and chopping off his own hand* “Ever see 127 Hours?” 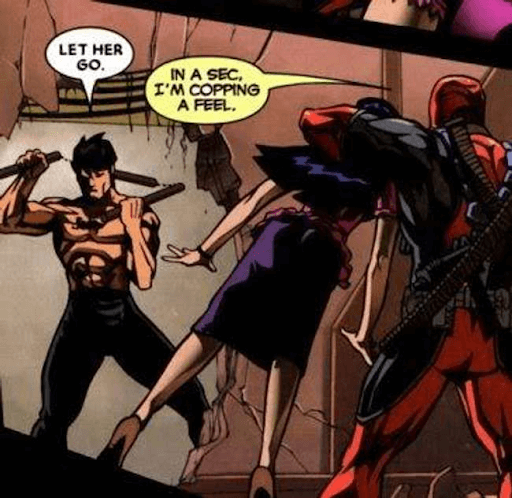 Guy: “Do you know anything about science, Mr. Wilson?”

Deadpool: “I have every episode of Star Trek. The classic. Not the one with the bald guy that looks like Professor X.”

#20  “Listen Al, if I never see you again, I want you to know that I love you very much. I also buried 1,600 kilos of cocaine somewhere in the apartment — right next to the cure for blindness. Good luck.”

Weasel: “Oh, motherfucker, you are hard to look at.”

Weasel: “You look like Freddy Krueger face-fucked a topographical map of Utah.”

And we won’t forget about the post-credits one:

#22  “You’re still here? It’s over. Go home! Oh, you’re expecting a teaser for Deadpool 2. Well, we don’t have that kind of money. What are you expecting, Sam Jackson show up with an eyepatch and a saucy little leather number? Go, go.” 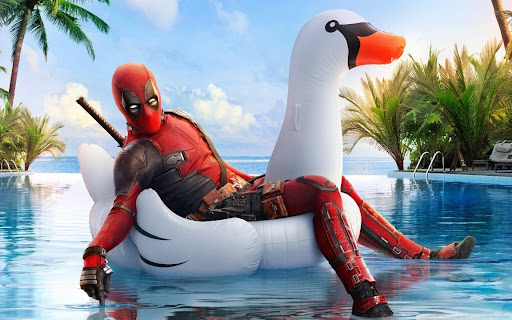 #1  “I know, right? You’re probably thinking, ‘Whose b***s did I have to fondle to get my very own movie?’ I can’t tell you his name, but it rhymes with ‘Polverine.’ And let me tell you, he’s got a nice pair of smooth criminals down under.”

#2  “It’s a big house. It’s weird I only ever see two of you. Almost like the studio couldn’t afford another X-Man.”

“Here’s what I’m actually gonna do. I’m gonna work through his crew until somebody gives up Francis, force him to fix this, then put a bullet in his skull and fuck the brain hole!”

#5   “You even look in her direction, and I’ll show you that I’ve got some hard spots… that came out wrong… or did it?”

#7  “All of these elderly white men on the walls, I should have brought my rape whistle.”

Colossus: “You know I can hear you?”

Deadpool: “Wasn’t talking to you! [points at the camera] I was talking to them!”

#9  “You know what we need to do? We need to build a f**king team. We need them tough, morally flexible, and young enough so they can carry this franchise ten to twelve years.”

#10  “Never underestimate a man with a mustache. Just ask anyone in Brooklyn.”

#11  “Only best buddies execute pedophiles together.” 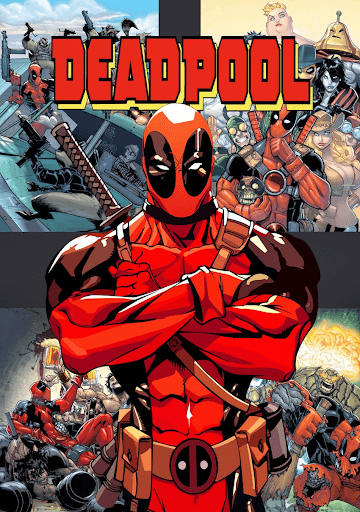 Weasel: “You spelled ‘Hi Weasel with his intestines.”

Deadpool: “Yup. I’ve got my sunscreen on and I’ve taken my motion sickness pills so bring on the rides!”

Arcade: “No. You are going to physically die… as in stop breathing. You will cease to exist.

Deadpool: “Riiiiiight… So do you have bumper cars here?”

#3   “I am confused by you morally, psychologically and hormonally. A perfect mind-$%@# trifecta.”

#5  “For the love of Bill Gates this thing is adorable.”

#9  “Oh, man. He sure is talking a lot. Got to stay…focused. Boring speech causing…attention…to wane. Yeah, tacos sound good. I like the soft chicken tacos.”

If you’ve never watched Deadpool- then know that Deadpool is about a disfigured cancer patient seeking revenge on the man who destroyed his looks. Sounds exciting? Great cause it’s also an action packed, adventure filled, romcom superhero movie. Oh, and it stars Ryan Reynolds (that in itself makes it watch worthy!).

And If you’re a fan of Deadpool, you’d be ecstatic to know that Deadpool 3 is set to film by next year. And a new comic (Deadpool: Black, White and Red) is slated for a release by August of this year.

We hope you were able to pick up some life lessons in our list above. If not, then we really do hope you laughed along with us while reading through the quotes. If you want to read more, here are some articles we recommend:

35 I Will Always Love You Quotes [How Love Should Be]

25 Grinch Quotes (Let Go Of the Killjoy in You)